Just a quick update on the restock:
(look up animalpharm on ebay for full stock, the bigcartel store wont be online for another month)

Made up a batch of Adrafinil (300mg) + Milk thistle (200mg) REBOOT, the reasoning is that i’ve been getting messages from students that use adrafinil relatively frequently for cramming and functional late-nights, and i’m concerned that extended use is an unnecessary strain on the liver.  Adrafinil is metabolized into modafinil in the liver, and constant processing without a counteragent is bound to be unhealthy on a long enough time line. 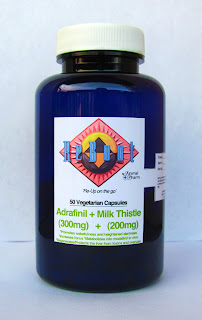 Milk thistle has been shown to both regenerate and protect the liver, kidneys, gallbladder and adrenal system from severe exposure to toxins(poison, acetaminophen, alcohol) during processing, as well as having several anti-cancerous traits.

I believe milk thistle will slow, stop, or even reverse any liver damage/strain due to extended use of the Adrafinil.

Aside from the Adrathistle blend ;), i’ve been trying to expand our compound base a bit, after we get everything we’ll be taking the next month or so to stabilize and make sure we keep everything in stock, then release some more varied REBOOTs.

& in the near future we’re looking to get some:
B-12(pure Methylcobolamin), ashitaba, and huperzine A

also looking into pyritinol and methylene blue, but pyritinol has been linked to liver problems, although i havent looked through any of the data yet.  Methylene blue i just heard about recently, but it looks very interesting, and looks to be pretty cheap in both liquid and powder form.  Its also used to keep fish tanks free of disease, so thats weird.

also one last side note, im toying with the idea of reformulating tetsuo, by dropping the noopept dose from 75mg per cap to about 20 or 30mg in favor of lions mane, vinpocetine, or maybe a bit more choline.  The reason being the max dose at 3 caps is 225mg(3x75mg) of noopept, and anything more than 100-150mg at a time is just a waste.  I like the idea of introducing more back-end NGF(nerve growth factor) from the lions mane, as it ties in with the tetsuo theme better too.  Plus a compound like vinpocetine or huperzine A is dosed so small that its inclusion wouldnt really have any negative effects, space-wise.

Just a quick expansion to the Adrafinil/Milk Thistle combination:

I got a message today from someone who just picked up the Adrafinil/Milk Thistle combo and he had expressed concern regarding the metabolization of the Adrafinil with the thistle present, and it prompted me to go on an infodig(while on the adra/thistle combo myself :D) to see what i could find.

Essentially the concern was that the Milk thistle would weaken the effects of the adrafinil by lowering the production of CYP3A4 enzyme(a chief enzyme used to break down non-host-produced chemicals(drugs and poisons)) in the liver, making it more difficult to metabolize the adrafinil into modafinil overall.

One study i found does state that Silymarin(the active ingredient in milk thistle) concentrations after receiving 600mg a day of milk thistle(200mg thrice daily for 2 weeks) was negligible and simply not high enough to affect either CYP3A4 or VGT1A1 functions in-vivo, indicating that milk thistle is “unlikely to alter the disposition of drugs metabolized by these enzymes.”  To obtain high enough levels of Silymarin in the system to affect CYP3A4 levels, it is suggested that a high dose of liquid milk thistle extract would need to be taken intravenously, or to a lesser degree, sublingually.

Anecdotal evidence suggests that taking very large doses of milk thistle with Modafinil can lengthen the tail end of the drugs effects, as a result of the induction of CYP3A4(and thus a slower processing time for the drug), but it is unknown as of this writing whether hi-doses of milk thistle result in a loss of CYP3A4, resulting in less adrafinil ultimately processed, whether it keeps the metabolization process throttled enough to lessen the effects, possibly lengthening them overall, or whether it has any effects at all.  Remember, we’re talking hi-doses here.

So according to current (somewhat limited on the adrafinil side)datasets and what i can gather, taking Adrafinil and Milk thistle together at regular doses(300mg/200mg) shouldnt have any immediate pronounced effects on liver enzyme levels, and that both compounds should retain their full level of potency even when taken together, as the mechanisms differ and are fairly widespread; though to be fair, there is not, as far as i’ve seen, any clinical nor anecdotal information on taking the two together, only the physiological effects of taking one or the other, or milk thistle with modafinil(premetabilized adrafinil).

We are relocating across the country! Expect order delays for the next 2-3 weeks while we are in transit and getting situated in our new space! Thank you for your support and patience during this time! TAKE CARE AND ENJOY!
-t

We apologize to our Australian friends, usps increased shipping costs around 4x a couple weeks ago, now they wont let us ship anything your way. We’re keeping an eye on the situation and hope itll sort itself out soon. Our thoughts are with our Aussie brethren until then 🐸

What a year it’s been